Come and join the members of the RCRMC for their monthly meeting and complimentary breakfast. This month they will be hosting Rockwall County Sheriff, Terry Garrett.

Sheriff Garrett will address the state of the Sheriff’s office, the progress of the new county jail, as well as other topics of interest.

Terry began his 40-plus-year career in public safety in 1976, working as an ambulance attendant. He joined the Rockwall Volunteer Fire Department in 1978 while continuing to work as an EMT and as a dispatcher for the Rockwall Police Department.

For 26 years, Terry worked for and served the citizens of Rockwall as a police officer. During those years, he was also an active member of the Rockwall Volunteer Fire Department.

Following his time with the City of Rockwall, Terry was appointed Director of Public Safety for the City of Heath in 2006, where he served as both police and fire chief.

Terry was sworn in as Rockwall County Sheriff on January 1st of this year.

A Message from the County Chairman:

The Republican party of Rockwall County has openings for Precinct Chairs in the following precincts: 2b, and 3. The primary role of the Precinct Chair is educating and registering voters, and turning out the vote for the Republican Party.

Republicans interested in getting more information or in applying for Precinct Chair in the precinct where they reside should send a statement of interest to County Chair Sharon Henson: rockwallrepublicans@gmail.com 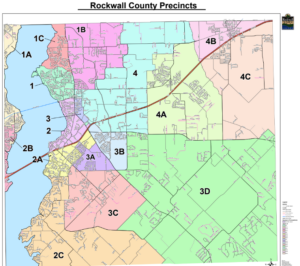